Anticipation is high at the Times Union Center as the hints Ariana Grande has been dropping have now been confirmed to be true! The voice of “God Is A Woman,” has returned in 2019 with a massive North American tour in support of her new album “Sweetener”! Coming to the Times Union Center on Monday 18th March 2019 – be there!! Book your tickets to see the phenomenal Ariana Grande NOW while you still have the chance! 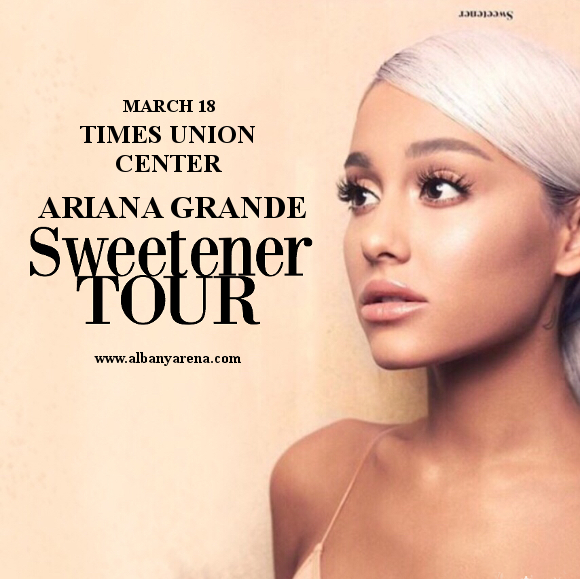 In the wake of the tragic bombing of her concert in Manchester, the world held its breath to see what Ariana Grande’s response would be with her next album. After organising benefit gigs for the victims and their families, her first words on the subject were written in the song “No Tears Left to Cry,” the stunning debut single, expressing her sorrow. "When you’re handed a challenge, instead of sitting there and complaining about it, why not try to make something beautiful?" the singer reflected, speaking only briefly about the attack to avoid it lending power. The album as a whole represents togetherness and strength – a message of unity between the artists and her fans.

Now get ready to experience that feeling live. Have you got your tickets yet??