International superstar and pop icon Celine Dion comes to Times Union Center on Saturday 7th December 2019 on her Courage Tour! The record-setting live performer is touring to support her new album, Courage, on her first global tour in a decade and, as is always the case with this incredible showstopper, she'll be pulling out all the stops: “It’s not gonna be the Las Vegas show. It’s gonna be the songs that I hope that you want to hear. The songs that you used to hear me sing,” Celine said. “I would like for this tour to be the most spectacular tour.” 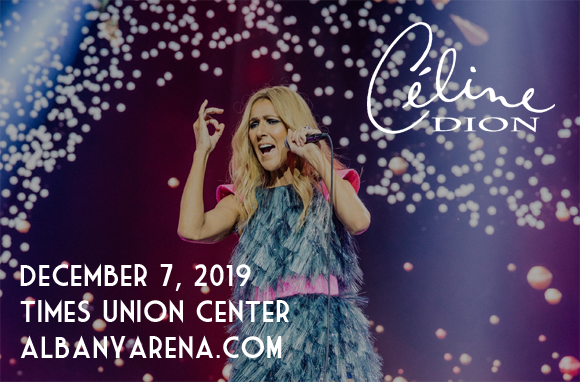 Canadian singer Céline Dion is one of the world's best-selling artists of all time with record sales of over 200 million copies worldwide, in addition to being the second best-selling female artist in the US during the Nielsen SoundScan era, and Canada's best-selling artist. A five-time Grammy Award-winner, she has also been named by Billboard as the "Queen of Adult Contemporary" for having the most number ones in radio format for a female artist. Beginning as a French-language teen superstar in Canada in the 1980s, Dion found international fame upon winning both the 1982 Yamaha World Popular Song Festival and the 1988 Eurovision Song Contest, where she represented Switzerland. She released a number of best-selling English albums throughout the 1990s, including Falling into You (1996) and Let's Talk About Love (1997), which were both certified diamond in the US, launching number-one hits worldwide, including "The Power of Love", "Think Twice", "Because You Loved Me", "It's All Coming Back to Me Now", "My Heart Will Go On", and "I'm Your Angel". Dion also continued to release incredibly successful French-language albums, including D'eux (1995), which became the best-selling French-language album of all time, and S'il suffisait d'aimer (1998), Sans attendre (2012), and Encore un soir (2016), which were all certified diamond in France. She also a hugely successful live performer – her Las Vegas residency A New Day… in Las Vegas Strip (2003–07) remains the highest-grossing concert residency of all time, and the Taking Chances World Tour (2008–09), is one of the highest-grossing concert tours of all time.