A man who needs no introduction to EDM fans, Tiesto, is coming to Times Union Center on Friday 10th November 2017 for the party of the year!!! The Dutch legend is coming as part of his Club Life College Invasion Tour, dropping his biggest tunes to get the dancefloor going wild!

“I’m very excited to announce my College Invasion Tour,” Tiësto says. “It provides a way for me to bring my show to new parts of the continent and to a new generation of music fans. American and Canadian college students have always played an important role in the development of musical acts and genres. I hope that this tour helps to establish dance music in the same way.” 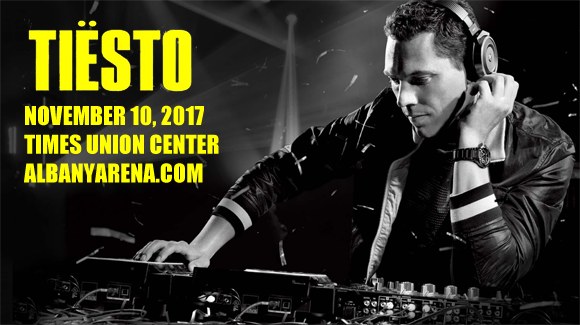 Dutch DJ and record producer Tiësto began his music career in 1994. He first gained mainstream recognition with his 2000 remix of Delerium's "Silence" featuring Sarah McLachlan, and in 2001, he released his first solo album, In My Memory, launching several major hits and catapulting him to stardom. Often cited as the Godfather of EDM, Tiësto was voted World No. 1 DJ by DJ Magazine in its annual Top 100 DJs readership poll consecutively for three years from 2002–04, named "the Greatest DJ of All Time" by MixMag magazine in a fan poll, and in 2013 he was voted by DJ Magazine readers as the "best DJ of the last 20 years". He won the Grammy Award for Best Remixed Recording, Non-Classical for his remixed version of John Legend's hit "All Of Me" at the 57th Annual Grammy Awards.