One of the biggest pop bands of our time, Fleetwood Mac, comes to Times Union Center on Wednesday 20th March 2019! With a brand new line-up, featuring Mike Campbell of Tom Petty and the Heartbreakers and Neil Finn of Crowded House, the chart-topping hit-makers will be performing songs from their glittering, five-decade career! A must-see for all 'Mac fans! 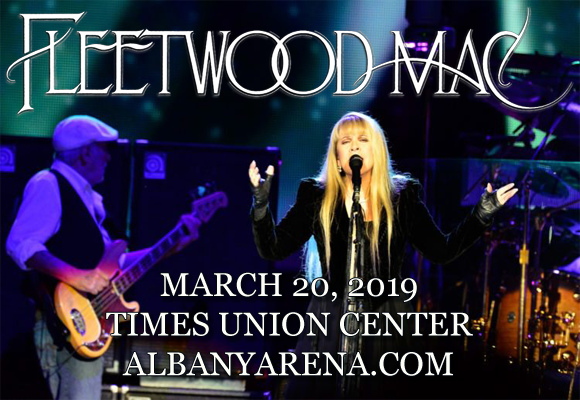 Fleetwood Mac are one of the biggest-selling bands of all time. Founded in 1967 by Peter Green (guitar), Mick Fleetwood (Drums) and Jeremy Spencer (guitar), the group first found fame as a blues rock band, scoring a 1968 UK number one with their hit single “Albatross”. The group found moderate success in the early 1970s, but experienced several drastic changes in line-up and musical direction, leading to their 1977 smash hit album, Rumours, which has now sold over 40 million copies worldwide, making it one of the best-selling pop albums of all time. The band's current line-up consists of: Stevie Nicks (vocals), Christine McVie (keyboards, vocals), John McVie (bass guitar), Mick Fleetwood (drums) and guitarists Mike Campbell, formerly of Tom Petty and the Heartbreakers, and Neil Finn, formerly of Split Enz and Crowded House.