Ten-time Grammy Award-winning, multi-platinum-selling superstar Justin Timberlake is coming to Times Union Center on Saturday 20th October 2018! Getting campfire cosy with fans on his Man of the Woods Tour, with help from the incredible talent of his band the Tennessee Kids, Timberlake and his new show will blow you away! Tickets available now! 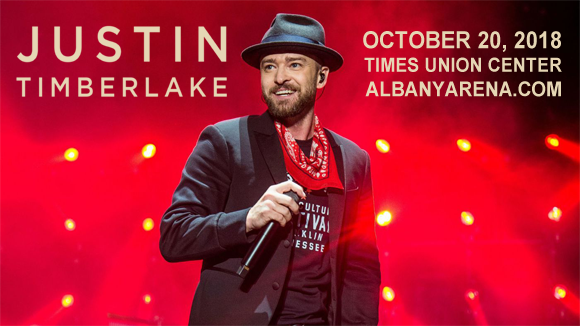 Justin Timberlake is one of the world's best-selling music artists, having sold over thirty two million albums and fifty six million singles globally to date. The American singer-songwriter, actor, dancer, and record producer began his entertainment career as a child, appearing on the television shows Star Search and The All-New Mickey Mouse Club. In the late 1990s, Timberlake went on to be part of NSYNC, one of the best-selling boy bands of all time, performing as one of two lead vocalists in the band. In 2002, Timberlake distanced himself from the band to embark on a solo career, with fellow NSYNC member Lance Bass eventually confirming the permanence of NSYNC's "temporary hiatus" in 2007. Timberlake's debut solo album, Justified, debuted at number two on the Billboard 200 in 2002, launching the singles "Cry Me a River" and "Rock Your Body", and earning him his first two Grammy Awards. Timberlake's following four studio albums have all reached number one on the Billboard 200, including his most recent album, 2018's Man of the Woods. Throughout his career, Timberlake has won ten Grammy Awards, four Emmy Awards, three Brit Awards, and nine Billboard Music Awards.