Vaudevillian punk pop chart-toppers Panic! At The Disco bring the ominously-titled Pray For The Wicked Tour to Times Union Center on Tuesday 15th January 2019! Performing from the hot new album of the same name, Brendon Urie and his spectacular entourage always bring captivating showmanship and epic tunes to the stage – prepared to be blown away! Support form Harlem singer-songwriter Two Feet! 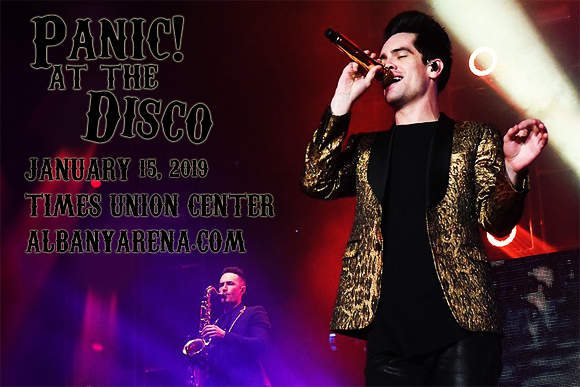 Originally a high-school band formed in Las Vegas, Nevada in 2004 by childhood friends Ryan Ross, Spencer Smith, Brent Wilson and Brendon Urie, Panic! At The Disco is an American rock act. After sending a demo to Fall Out Boy's Pete Wentz, the band were signed to his Fueled by Ramen imprint label Decaydance Records, and they released their debut studio album, A Fever You Can't Sweat Out, in 2005. The album was eventually certified double-platinum, and launched the US Top Ten single "I Write Sins Not Tragedies". Over the course of their six studio albums, the band has changed personnel and musical direction several times (with lead singer Brandon Urie currently serving as the band's only official member), but has remained popular both critically and commercially. Pray For The Wicked, Panic! At The Disco's most recent studio album, was released in 2018.