Fans of new wave, get ready for the biggest event of the year! It’s the Retro Futura Tour, led by Howard Jones, coming to the Times Union Center on Sunday 13th August 2017. Tickets on sale now – don’t delay in getting yours, we fully expect this show to sell out!! 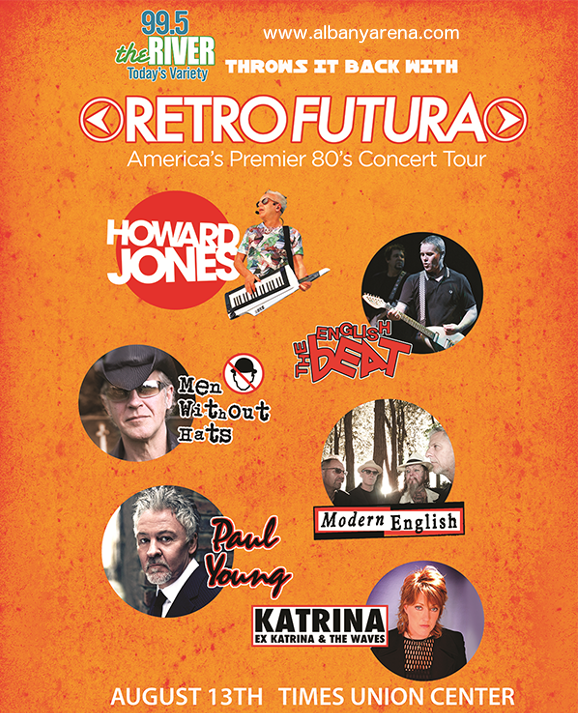 First appearing on the contemporary music scene in 1983, Howard Jones has been a pioneering force in electronic music for over three decades. His first album, “Human’s Lib,” hit number one on the UK Charts 1984 in the UK with the smash hits “New Song,” and “What Is Love?” His follow-up, “Dream Into Action” was every bit as successful – and more! Featuring the hits “Things Can Only Get Better,” “Life In One Day,” and “No One Is To Blame,” the album reached the Top Ten in the United States and was quickly certified Platinum!

Also on the bill are English Beat, known for their cover of “Tears Of A Clown,” by Smokey Robinson and their extensive touring with massive acts such as The Clash, The Police and David Bowie!! Men Without Hats started out with a breakout show at SXSW and have followed it up with enthusiastically received tours across North America, using their fresh, energetic modern sound and highly charismatic frontman to their full advantage!! Other major acts include Modern English, Paul Young and Katrina (of Katrina And The Waves) – for new wave fans, this is truly an unmissable event!!

What are you waiting for?? Get your tickets to the Retro Futura Tour TODAY!!!