Ladies and gentlemen, we have a truly incredible event coming up at the Times Union Center! Tickets are now available to see none other than the legendary vocalist of Pink Floyd, Roger Waters himself! Get your tickets and get down for Saturday 23rd September 2017!!! 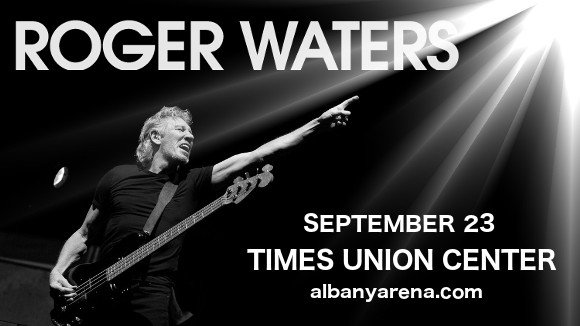 Few artists have as distinguished and successful a career behind them as Roger Waters. Initially the bassist of British progressive rock icons Pink Floyd, he took over songwriting and singing duties from Syd Barett when he left the band in 1968, assuming control of the band’s structure and creative direction. As a member of Pink Floyd, he was inducted into the US Rock and Roll Hall of Fame in 1996, and into the UK Music Hall of Fame in 2005.

Named "Roger Waters – Us + Them" after the song on Pink Floyd's iconic album, “The Dark Side of the Moon”, the five-month run through major North American arenas will be Waters' first tour since 2013, when he performed "The Wall Live," a solo reconstruction of Pink Floyd's landmark 1979 album, The Wall.

The tor will feature a totally new audio-visual presentation of Pink Floyd’s work, together with songs from Roger Walter’s brand new upcoming solo effort with Radiohead producer Nigel Godrich. The tour also has a distinct political slant, as Roger Waters explained regarding the name; “The tour is called "Us and Them" because it is about reaching out, holding hands and understanding – particularly understanding the simple things I have been saying for the last 40 or 50 f****** years, which is, "Building walls is not the answer.”"