Get ready for the biggest tour of the year. Led by TobyMac, the Times Union Center plays host to the Hits Deep tour, a night of unbelievable entertainment with a massive line-up including Matt Maher, Mandisa, Mac Powell, Capital Kings, Ryan Stevenson and Hollyn!! Get your tickets NOW for this sellout show, get yourself down to the Times Union Center early on Thursday 16th March 2017, and get ready to dance like you've never danced before!! 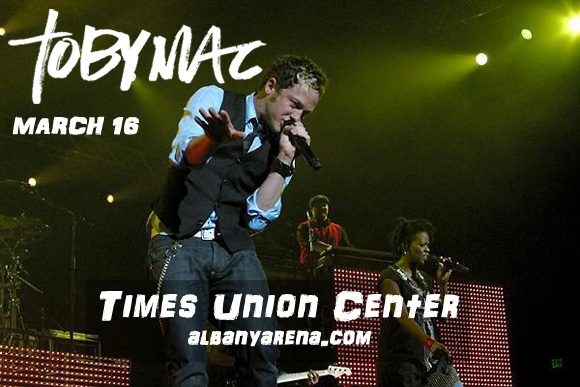 Toby McKeehan, known by his stage name TobyMac, is one of the most successful Christian hop hop artists of all time! First gaining attention as part of the vocal trio DC Talk, he stayed with them until 2000 before starting his solo career. His first release, Momentum, was received to critical acclaim, receiving 10 stars from Cross Rhythms, who said of it; "This eclectic album takes you on a breathtaking tour of diverse styles from gospel, on 'J Train' which features Kirk Franklin, to hard music, 'Yours' and 'Extreme Days' (featured on the film soundtrack), to the more subtle shades of hip hop, 'Irene' and 'In The Air' (a take of a classic Motown hit), all with Toby's infectious touch of rap throughout. The mixture of so many styles on this project made it tricky to place it under a category — perhaps rock would have been just as apt!… the production and lyrical quality is superb.” The album was nominated for a Grammy.

Following this soaring debut, TobyMac went on to new heights, releasing five more albums, selling over 10 million and winning 7 Grammy Awards in total. Do not miss your chance to see this genre-melting, mind-blowing master of hip-hop in action – grab those tickets QUICK!!